C’tan Shard of The Deceiver

C’tan Shards are beings of near-unlimited power. They can manifest energy blasts, control the minds of lesser beings, manipulate the flow of time, and banish foes to alternate realities. Indeed, a C’tan Shard’s abilities are limited only by two things: its imagination – which is immense – and glimmering memories of the being from which it was severed many years ago. While no C’tan Shard has full recall of the omnipotent creature it once was, each carries the personality and hubris of that far vaster and more puissant being. As such, these eccentric and unpredictable Shards will often dispatch their foes in an unexpected, though surprisingly pragmatic way. They could project a transdimensional thunderbolt from their finger-tips, bombard their enemies with rocks and boulders, turn themselves into a singularity and destabilise gravity, or just fling their adversary backwards through time until they disintegrate.

This box contains one C’tan Shard of The Deceiver – a finely detailed resin cast kit that comes as nine components, and is supplied with a 40mm Round Base. This miniature is supplied unpainted and requires assembly – we recommend using Citadel Super Glue and Citadel Paints. 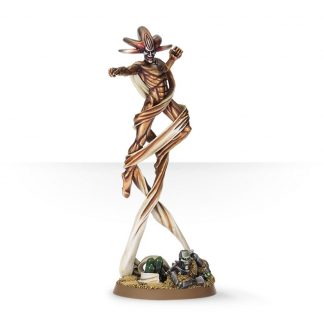