Adventures of the Super Sons Vol. 2

TWO SUPER-KIDS. AN ARMY OF SUPER-POWERED JUVENILE DELINQUENTS. WHAT COULD GO WRONG?

Jonathan Kent is Superboy, the son of Superman. Damian Wayne is Robin, the son of Batman. Before things got a little complicated recently, the Super Sons were just two best friends off on a summer vacation adventure into the farthest reaches of space. Unfortunately, after running afoul of Rex Luthor–a crazed alien preteen who’s styled himself after Earth’s foremost evil genius–Jon and Damian find themselves in the last place two young heroes would ever expect to be: interstellar juvie!

But to Rex Luthor, a prison planet full of bad-seed alien kids is the perfect place to make his move. All it takes is costumes and weapons based on Earth super-villains, and suddenly Rex is being backed up by his own Injustice Army! With hundreds of allies like Doomsdame and Brainiac 6, nothing can stop Rex from defeating the Super Sons and setting his sights on Earth! Well, nothing except a trainee Green Lantern kid with no power ring, a robot cowboy and the only Injustice Army member brave enough to stand up to Rex: Joker Jr.

Oh, and also the sons of the two greatest heroes of all time, who are determined to save the universe and get back home before the new school year starts. They don’t call them the Super Sons for nothin’! 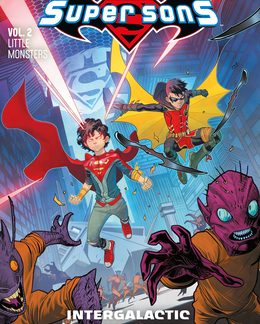